This is Bishop John Shelby Spong. 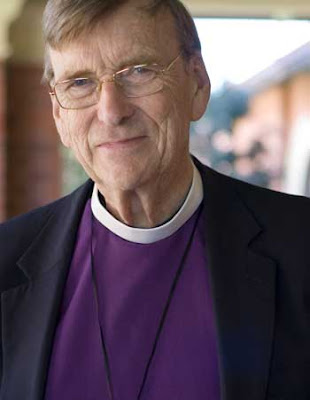 Before tonight I would have told you I didn’t have a clue who he was.  Thanks to Patti Digh, he has been brought to my attention and I feel his sentiments are worth sharing and long overdue.
Despite being raised in a Christian church which I attended on and off throughout my younger years, I have long since abandoned any institution who historically spent far more time engaged in condemnation, hatred and murder than in love and compassion.  Thus I have made my spiritual journey my own daily, moment-to-moment practice, and I am typically completely ignorant of any debate going on in any religious group for that matter.  Quite frankly, I find it asinine that there even IS a debate on this topic anywhere on this planet…..about as unfathomably ridiculous as refusing a woman to vote or a seat on a bus to someone with dark skin.  Huh??!!  I still have a hard time wrapping my head around how it is possible for such ignorance to ever have existed at all.  Really.  What the hell is the matter with our brains?….Oh yes, they only function when open.
From my perspective, (and I’m sure this will ruffle a few feathers), if Jesus were alive today, I pretty sure he’d stand and cheer, “Amen, Brother!” after reading this.  He was after all a “shit-disturber” in his own right way back in the day….and above all he recognized and lived with uncompromising love and compassion.
In the words of Forrest Gump, “That’s all I got to say about that.”


A Manifesto! The Time Has Come!
–Bishop John Shelby Spong


I have made a decision. I will no longer debate the issue of homosexuality in the church with anyone. I will no longer engage the biblical ignorance that emanates from so many right-wing Christians about how the Bible condemns homosexuality, as if that point of view still has any credibility. I will no longer discuss with them or listen to them tell me how homosexuality is “an abomination to God,” about how homosexuality is a “chosen lifestyle,” or about how through prayer and “spiritual counseling” homosexual persons can be “cured.” Those arguments are no longer worthy of my time or energy. I will no longer dignify by listening to the thoughts of those who advocate “reparative therapy,” as if homosexual persons are somehow broken and need to be repaired. I will no longer talk to those who believe that the unity of the church can or should be achieved by rejecting the presence of, or at least at the expense of, gay and lesbian people. I will no longer take the time to refute the unlearned and undocumentable claims of certain world religious leaders who call homosexuality “deviant.” I will no longer listen to that pious sentimentality that certain Christian leaders continue to employ, which suggests some version of that strange and overtly dishonest phrase that “we love the sinner but hate the sin.” That statement is, I have concluded, nothing more than a self-serving lie designed to cover the fact that these people hate homosexual persons and fear homosexuality itself, but somehow know that hatred is incompatible with the Christ they claim to profess, so they adopt this face-saving and absolutely false statement. I will no longer temper my understanding of truth in order to pretend that I have even a tiny smidgen of respect for the appalling negativity that continues to emanate from religious circles where the church has for centuries conveniently perfumed its ongoing prejudices against blacks, Jews, women and homosexual persons with what it assumes is “high-sounding, pious rhetoric.” The day for that mentality has quite simply come to an end for me. I will personally neither tolerate it nor listen to it any longer. The world has moved on, leaving these elements of the Christian Church that cannot adjust to new knowledge or a new consciousness lost in a sea of their own irrelevance. They no longer talk to anyone but themselves. I will no longer seek to slow down the witness to inclusiveness by pretending that there is some middle ground between prejudice and oppression. There isn’t. Justice postponed is justice denied. That can be a resting place no longer for anyone…


In my personal life, I will no longer listen to televised debates conducted by “fair-minded” channels that seek to give “both sides” of this issue “equal time.” I am aware that these stations no longer give equal time to the advocates of treating women as if they are the property of men or to the advocates of reinstating either segregation or slavery, despite the fact that when these evil institutions were coming to an end the Bible was still being quoted frequently on each of these subjects. It is time for the media to announce that there are no longer two sides to the issue of full humanity for gay and lesbian people. There is no way that justice for homosexual people can be compromised any longer.


I make these statements because it is time to move on. The battle is over. The victory has been won. There is no reasonable doubt as to what the final outcome of this struggle will be. Homosexual people will be accepted as equal, full human beings, who have a legitimate claim on every right that both church and society have to offer any of us. Homosexual marriages will become legal, recognized by the state and pronounced holy by the church. “Don’t ask, don’t tell” will be dismantled as the policy of our armed forces. We will and we must learn that equality of citizenship is not something that should ever be submitted to a referendum. Equality under and before the law is a solemn promise conveyed to all our citizens in the Constitution itself. Can any of us imagine having a public referendum on whether slavery should continue, whether segregation should be dismantled, whether voting privileges should be offered to women? The time has come for politicians to stop hiding behind unjust laws that they themselves helped to enact, and to abandon that convenient shield of demanding a vote on the rights of full citizenship because they do not understand the difference between a constitutional democracy, which this nation has, and a “mobocracy,” which this nation rejected when it adopted its constitution. We do not put the civil rights of a minority to the vote of a plebiscite.

style=”font-family: georgia,palatino;”>The battle in both our culture and our church to rid our souls of this dying prejudice is finished. A new consciousness has arisen. A decision has quite clearly been made. Inequality for gay and lesbian people is no longer a debatable issue in either church or state. Therefore, I will from this moment on refuse to dignify the continued public expression of ignorant prejudice by engaging it. I do not tolerate racism or sexism any longer. From this moment on, I will no longer tolerate our culture’s various forms of homophobia. I do not care who it is who articulates these attitudes or who tries to make them sound holy with religious jargon.
I have been part of this debate for years, but things do get settled and this issue is now settled for me. I do not debate any longer with members of the “Flat Earth Society” either. I do not debate with people who think we should treat epilepsy by casting demons out of the epileptic person; I do not waste time engaging those medical opinions that suggest that bleeding the patient might release the infection. I do not converse with people who think that Hurricane Katrina hit New Orleans as punishment for the sin of being the birthplace of Ellen DeGeneres or that the terrorists hit the United Sates on 9/11 because we tolerated homosexual people, abortions, feminism or the American Civil Liberties Union. I am tired of being embarrassed by so much of my church’s participation in causes that are quite unworthy of the Christ I serve or the God whose mystery and wonder I appreciate more each day. Indeed I feel the Christian Church should not only apologize, but do public penance for the way we have treated people of color, women, adherents of other religions and those we designated heretics, as well as gay and lesbian people. I am ready now to claim the victory. I will from now on assume it and live into it. I am unwilling to argue about it or to discuss it as if there are two equally valid, competing positions any longer. The day for that mentality has simply gone forever.

This is my manifesto and my creed. I proclaim it today. I invite others to join me in this public declaration. I believe that such a public outpouring will help cleanse both the church and this nation of its own distorting past. It will restore integrity and honor to both church and state. It will signal that a new day has dawned and we are ready not just to embrace it, but also to rejoice in it and to celebrate it.

I hold that vision…that Love is all there is. We live in very uncertain and...

I haven’t “Pulled an all-nighter” since college days.  But it certainly shows you what you...

I’ve been reading many posts on blogs and facebook about 2012.  The usual yearly reviews...

I have been awash in the busy-ness of Christmas shows, and for most of them...

I thought I would simply share a great article by Lesley Riley that crossed my...

My dear mom is living through the ordeal that is cancer and the cancer-machine that...

Gifted with a perpetually curious mind, I am always enamored with learning something new.  And...

“If there is no passion in your life, then have you really lived? Find your...